It appears promise rings arrived only in the recent past, but there is proof to imply that these originated in ancient Rome. Even then, the rings signified a promise like these pieces of jewelry does now. Generally, couples used to exchange the rings as a sign of their commitment and loyalty for each other, but the underlying ideas for these are more flexible today.

In the Stuart period, British people gave ‘posy’ rings to one another as a promise of friendship or love. These jewelry pieces had the engravings of promises to the lover or friend.

The rings were exchanged to symbolize vows between individuals years ago, but the use of the word ‘promise’ to describe these pieces is rather recent. A 1970’s jewelry dictionary first described it as a promise ring, a term that has stuck since then (with a different meaning).

Now, it may signify a person’s commitment to another one. It tends to be considered a preengagement ring for a dedicated couple wishing to show mutual devotion, yet is not yet prepared for marriage. Promise rings come in various forms, including plain bands and gemstone-set styles, but these should not outshine bridal engagement rings or wedding bands.

A promise generally signifies commitment in a couple who is bound to get engaged and hitched, but this need not be the case always. It can also represent a promise of fidelity that lets the recipient know that the giver is committing to him or her and will stay loyal. In a different scenario, it can inform the ring recipient that they and their partner will abstain from a sexual relationship before getting hitched. The commitment to stay celibate is made by exchanging ‘chastity rings’, a form of promise ring.

The ring can also symbolize a relationship free of substance abuse or friendship that people promise to keep forever. Whatever it symbolizes, it should remind the couple to follow the intended route to achieve the objective.

How A Promise Ring Differs From An Engagement Ring

Austria’s Archduke Maximillian ordered the making of the first-ever historically recorded diamond engagement ring for Mary of Burgundy. Before that, bridal engagement rings had leaves in place of gemstones.

There is just one symbolism to an engagement ring. It is a token of one’s plan to get hitched. Promise rings are typically for women, but sometimes, men also wear these jewelry pieces. Conversely, most often, the bride-to-be wears an engagement ring. An engagement ring is usually pretty costly, comes with a diamond, and it will be an everlasting token of love and commitment.

Its purchase and the tradition of proposing marriage with it takes more careful thought compared to a vow ring. A man generally pops the question to his lady love by going down on one knee with a diamond engagement ring in his hand. Conversely, it is not just as common to see women giving men promise rings. This is another big difference between these two jewelry pieces.

Anyone aged 20 to 50 years can and do marry, especially in forward-thinking societies. So couples of just about any age can be seen exchanging engagement rings. On the contrary, promise rings can be exchanged by young individuals, who are not old enough to get hitched or make a big commitment. They just wish to reveal their present relationship status by giving a preengagement ring.

Students decide to give simple promise rings because they lack a job and do not have enough money to make a big purchase.

Another difference amid the two jewelry pieces is regarding on which finger these are traditionally worn. Conventionally, a person rocks their promise ring on the left-hand finger, but after the engagement, they move it to their right hand. The other piece is most often sported on the same finger, between the pinkie and the middle finger. In some cases, it is a personal matter to decide on which hand to wear a ring.

Some people prefer wearing the former piece on the right hand from the moment they are given it, to clarity their non-engaged status. The wearer would not like to give the impression of being already engaged by wearing it on the traditional finger.

Giving somebody a promise ring tends to be a much less formal act compared to proposing with the other piece. When popping the question to your future fiancée, you can go to someplace romantic and spend a lot on both a proposal location and engagement ring. Many youngsters prefer to make their marriage proposal ceremony grand, but others do it at a more intimate setting like the place where they first met. Even in the latter proposal scenario, men spend much money on bridal engagement rings. 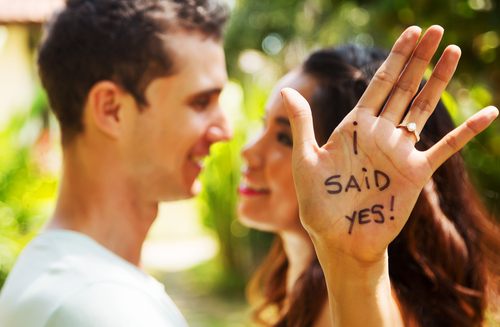 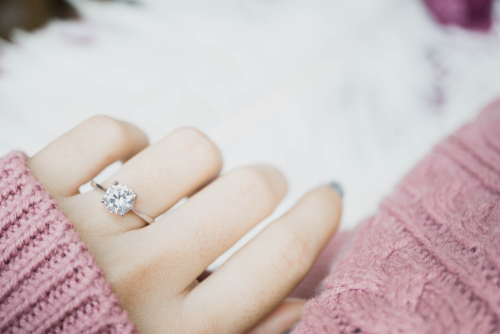